Investor appetite for residential property across Turkey has again confounded the experts, with the latest news that 20,000 more homes were sold in the first six months of 2017, than in the same period last year. Despite economic worries, ongoing security concerns and a state of emergency since last July’s attempted coup, Turkey’s housing sector has shown signs of remarkable resilience.

It is not only Turks who are tapping into the housing market. In the first half of 2017, 9,585 homes were sold to foreigners, an increase of 2.3 percent year on year. Reasons could be government incentives, such as the removal of VAT on first-time property sales, the ease of citizenship rights tied to property sales and a quicker turnaround in bureaucracy. 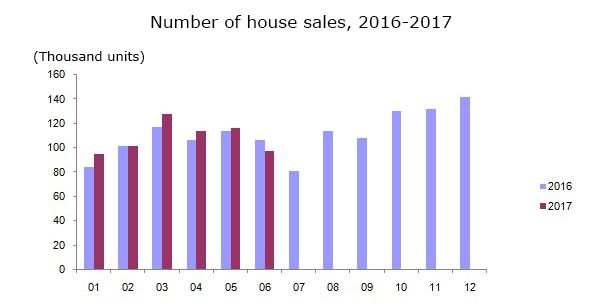 Istanbul is still highly popular with foreign investors buying 3,482 homes of the total 9,585. This was followed by the Antalya region in second place with 2,091 properties and thirdly, Bursa with 702 houses.

In the first half of 2017, the top eight foreign nationalities buying property in Turkey were Iraq, Saudi Arabia, Kuwait, Russia, Afghanistan, Azerbaijan, United Kingdom and Germany. Property experts believe that 2017 will outshine 2016’record of foreigners buying a staggering 18,189 homes.

The 2017 performance, so far, has been one of building month on month as the economy and security, two key criteria areas have become more stable compared to 2016.

A Month in Detail: Foreign Property Sales for June 2017

June offered mixed news on the property front. Overall sales were 97,579 properties, a fall of 16.3 percent compared with May and down 8.1 percent in June 2016.

However, the highlight was the surge in properties sold to foreigners. A rise of 24.8 percent year-on-year, nearly 400 additional homes was a stark reminder that just weeks from the first anniversary of the attempted coup, foreign buyers are in love with Turkey.

TurkStat data showed the top five foreigner buyers were Saudis who bought 612 properties, followed by Iraqis (239), Kuwaitis with 136 properties, Russians with 115 and Britons buying up 87.

As June 2017 rose with a near-25 percent surge in foreign property sales, TurkStat revealed that during the period from January 2013 to June 2017, foreigners bought 81,574 homes in Turkey.

With sales reaching an average of about 50 residences a day over the last four-and-a-half years, the recent decision for VAT exemption on first foreign property sales from April onwards had continued the surge in investor sentiment.

Istanbul came first with 24,813 homes sold to foreigners, around 30 percent of the total. Antalya came second with 24,605 and thirdly, Bursa (4,850). Over the same period, the data showed Middle Eastern buyers to be to the fore, particularly the residents of Saudi Arabia, Kuwait, and Iraq.

Looking Ahead: The Future of the Turkish Property Market

Turkish property experts believe demand will increase from September 2017 onwards. Ali Taylan, a chairperson of the Turkish Real Estate Advisory Agencies Federation (TEMFED), said demand was likely to be diverse, with areas such as the Black Sea provinces, like Trabzon, as well as Bursa and Sakarya, to be particularly busy.

Mr. Taylan added that coupled with government initiatives to revive the sector; property buyers were not only looking to buy residential homes but taking advantage of investment opportunities.

Melih Tavukçuoğlu, head of the Istanbul Anatolian-side Contractors Association, commented: “The interest of foreigners in Turkey increasingly continues since April. At this rate, we may close 2017 with 20,000 properties sold to foreigners.”

Nazmi Durbakayım, the chairperson of the Board of Directors of Istanbul Constructors Association (İNDER), was bolder, suggesting the records of 22,830 properties sold to foreigners in 2015 could easily be matched.

Guide to Buyers Real Estate Turkish Economy
previousForeigners will not Pay VAT while Buying a Property
nextTurkey Tourism 2023: The Vision

The Turkish Economy and Real Estate Market in 2018

Over the last few years, Turkey met with turbulent times following a failed 2016 coup, as well as a series of devastating terrorist attacks. However, in 2017, the country bounced back with style, and everyone...
Read more

Receiving the Title Deed is Easier Now for Foreign Buyers

Foreigners may purchase a property in Turkey for residential or workplace use, as long as they comply with legal restrictions. Until this month, all foreign property Title Deeds (Tapu in Turkish) was needed approval and special permission...
Read more

Turkey is set to establish the international real estate stock exchange, which will enable the properties in the country to be sold abroad. In May 2017, Nurettin Canikli, the deputy prime minister of Turkey said...
Read more

Advice on Buying a House in Turkey

Investing in a slice of Turkey by buying property is as easy as ABC if you stay focused on a few factors that are namely; location, money, type of property and agent. Location is Everything...
Read more